After the whole day outside with limited possibilities to use the bathroom, I’m finally relieved even though I had to try three different places and pay 6 pesos to be allowed to use the toilets at a bus terminal. Only three minutes left until the departure of our bus towards Ciudad Valles so better go directly to a platform, I can buy something to eat there anyway. But wait… where’s Míša!? All our stuff lying around on the floor, she’s nowhere in sight, like she’s been kidnapped. Is she hiding or playing a prank on me?

A guy from a transportation company is running somewhere looking at me and pointing at our baggage – I have no idea what he means by that, but before I start to load our things onto the bus, Míša appears looking quite confused to say the least. She quickly explains that we cannot board without a printed ticket we bought online in the morning and to confirm, another company employee simply shakes his head with a little understanding of our situation.

There’s no time to waste or to be precise: one minute to the departure! Without a moment of hesitation I’m running to a company’s counter to get the tickets printed, but the lady behind it is kind as a blizzard and navigates me „behind the corner“ to a small copy center where I’m fiercely typing an e-mail address displayed on a flat TV screen consisting of three words one of which is a complicated name of a local monument originally in Mayan language to be able to send the ticket to print.

A woman in charge smiling as she’s just received a birthday present asks for sixteen pesos for two printed pages. I stop for a moment, it doesn’t matter that the bus was scheduled to leave one minute ago… „Sixteen pesos just for two pages?“ A normal price is one or two pesos maximum. The undying smile goes: „Yes!“ Murmuring, I pay the price feeling like just being robbed, and rush to the platform to see, to my relief, another woman handing her suitcase over to the personnel of our bus. We made it! 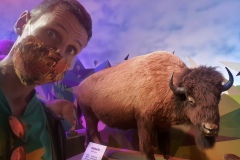 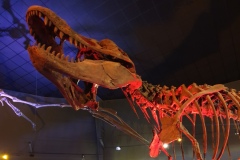 For the next few minutes after getting to our seats, I’m catching my breath and mainly trying to understand what just happened. Feels like an autopilot took over, there’s no time to think, not a single second to hesitate how to express myself in my pretty bad Spanish and I still somehow managed to deal with this almost hopeless situation. All of this while having eaten a couple of hallucinogenic peyote cacti just a few hours ago. But for this, we have to go back a few days…

I’d heard of the sacred peyote cactus a long time ago but since it’s not native to Europe or anywhere near, I hadn’t had an opportunity to get anywhere close to it. Coming to America for the first time in my life, all medicinal plants used by indigenous inhabitants for centuries have suddenly become more accessible. And when my girlfriend had accepted a last minute request to host a couchsurfer from our neighbouring country Slovakia who told us about her experience with the peyote that happened in a nearby mountain village Real de Catorce, we have added the place to our bucket list for an upcoming journey from Monterrey to south of Mexico.

Using hitchhiking at the Day of the dead, we got directly to Saltillo with its pretty historical center and magnificent Museum of Desert where they display dinosaur fossils and also have a little zoo, before we headed towards the highest mountain range of the Mexican state San Luis Potosí called Sierra Catorce once rich in silver and another precious metals. It took us the whole afternoon, but thanks to three kind drivers and for the last part of the route a local bus, just after the sunset, we arrived at a small village lying ca. 2600 meters a.s.l. In less than 20 minutes we found an affordable accommodation for two nights in a second floor of a house of local merchants and properly dressed for a freezing night went to explore the town that was already getting ready for bed.

Probably also because of the cold as a warmth-loving person she is, Míša started to ask around every second vendor whether he was selling the peyote. Most of them just shook their heads, the more friendly ones told us it grew in a desert towards the west and was pretty rare to find. Neither the next day we’re given a positive answer, even though she asked a local guide riding a horse in the abandoned settlement of Pueblo Fantasma a few kilometers from the village after we descended the highest peak of this Mexican state – Cerro Grande with its 3180 meters. And as I wasn’t lucky either when wandering around streets towards a cemetery still decorated for Día de los Muertos that was celebrated a few days ago, we were slowly reconciling with the peyote experience that it has to wait for now. Giving up for the day, I bought a peyocochon – a peyote shaped and colored cake – almost for the price of the real peyote.

One last attempt in the morning at a stand of a local herbs woman selling ointments with a peyote extract didn’t bring us anywhere near either and we started marching on a devious road down to desert plains below the mountains. There were no cars passing besides overcrowded jeeps with tourists, some of them even enjoying the ride on the roof, and we got lucky with our hitchhiking attempts almost at the end of the way, but it turned out to be real luck. Upon jumping off the car’s trailer, Míša mentioned our hopeless searching for peyote ceremonies or the cactus alone itself to the driver and he offered to bring us to a nearby desert where he’d help us to find it for a small fee.

When we got on the bumpy desert road, I was a little suspicious, probably also because I hadn’t understood all the Spanish conversation, but decided to just follow the events‘ turnout. The car stopped by a small smoldering dump and leaving all our things in the truck bed we started to follow our guide in browsing a surrounding flat landscape scarcely covered by small bushes. Not even in five minutes he’d encountered a first cactus and then another, I managed to find one right after, but then it’s just him discovering small round blue-green buttons hiding in sun dried soil under bushes and letting us dig them out. I was wondering whether we’d found them on our own at all, as they’re really tiny even after a few years of growth.

In the end we were heading back to a main road satisfied with two handfuls of cacti, more than we needed for our first peyote experience. A couple more hitchhikes had taken us to a 200 kilometers distant San Luis Potosí where we spent a night in the house of Gilberto, whom we had met on the Couchsurfing platform and who happened to be a professor at a local university. After an introduction to his elderly mother and a short walk around the historic center of the city the next morning he had bought us some chocolate from a famous local producer and had dropped us in a big park where we finally had some time for ourselves and our „catch“.

We’d already learnt before that the taste had been nothing pleasant but as we had been used to bitterness and not much sweet groceries lately, we managed to eat a couple pieces without troubles, only with a little help of the above-mentioned chocolate which, in fact, didn’t taste much better. Our bellies felt a little funny, but we didn’t feel sick and from a stone table with benches where we took the „snack“ we decided to move to a park’s center to lie on a lawn and enjoy a sunny afternoon there. An hour had passed and we still didn’t feel much of an effect even tho we hadn’t eaten since breakfast.

We felt a bit lazy or tipsy if you will and my perception of surroundings was a bit in a haze, but no real hallucinations appeared unlike in Míša’s case who started to see some interesting patterns on her legs. As the time progressed, we needed to catch a bus to our next destination so carrying all our stuff we started to walk out of the park smiling more than usual. A local autobus had come within a minute and after I had paid a little more clumsily than I normally do when dealing with Spanish we’re on the way towards a bus terminal, which we reached by walking from the place we got dropped of the bus what at that time felt like a neverending distance. 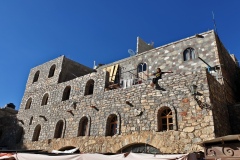 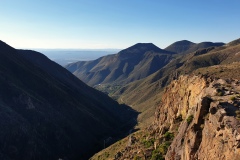 The next few hectic minutes you know already. Safe and sound in the bus, we can finally relax and enjoy the still active effects of peyote half sleeping and listening to both calm and energetic reggae music. Time to time I open my eyes only to see vivid scenes of a blockbuster movie playing on bus‘ TV screens which I’m not sure is totally off or it’s just me being high. When checking maps in my smartphone, I can see certain areas gradually shift their color from green to yellow – the first visual perception change.

Upon arrival at our next destination – quite busy town Ciudad Valles on the eastern edge of an area called La Huasteca Potosína – we still don’t have any accommodation for tonight. We thought we had one, but the host of a place I booked on the bus two hours ago never confirmed and our money is now blocked on Airbnb’s accounts so I have to deal with its cancellation over the phone which is luckily in English after a machine voice announces no Spanish operator is available.

Míša is smiling while she’s enjoying my struggle which gets promoted to another level when a bus station employee starts spraying water with a hose all over a platform and our baggage right after I start calling an owner of a small house I found just a few kilometers away – this time I don’t avoid Spanish. All goes surprisingly well and after a little shopping we’re cutting the last few meters to our new home for the next three nights even enjoying a beer. 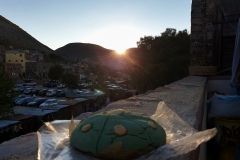 We soak our bodies in a delightfully hot shower and even though it’s been a long day, we are still full of energy and meditate a bit in a small backyard before we go to sleep around 2AM. The next morning there’s no hangover besides a little thirst and Míša tells me just thinking of the peyote makes her a bit woozy. One additional effect of the peyote is that it suppresses hunger – I don’t recall eating anything besides a few pieces of biscuits the other day after we’d digested the „green delight“. But as we have some more pieces of the cacti left and I really hate to dispose food, I eat them one day later – this time because of the smaller dose, there’s not that strong effect.

Overall it was an interesting experience, but in the same manner as with other substances well known to human kind and especially those used by indigenous people of specific locations, it should not be used as a recreational drug and I’d personally prefer having a proper guided session at least for the first time.

Thanks to Curtis who was kind to revise the article